A power amplifier for the serious garage door opener

While my serious garage door opener works nicely and reliably, it's output power is "only" 10 dBm (10 mW). It is able to open the garage door from about 100 m -- this is clearly not enough.

So I thought an impressive looking garage door opener needs an impressive amount of RF output power as well. And I found a wonderful solution to that problem, the SKY65116 chip module.

It provides up to 2 W of output power from 390 - 500 MHz, 30 dB of gain and its input and outputs are matched to 50 Ohm. In fact it contains a third matching circuit between the internal pre- and power-amplifier  It can be put into standby mode drawing only a few uA and thus can be left connected to the battery. When running at full blast it draws 1.2 A at 3.6 V, so its efficiency is about 50 %. Not bad at all!


Fun fact: 2 W of output power into a 50 Ohm load correspond to an RMS output voltage of 10 V. The module is powered by only 3.6 V though. The trick is made possible by the magic of impedance matching. There are internal inductors and capacitors in the chip, acting like a step-up transformer.

Basically you get an impressive amount of technology and save so much hassle (implementing a pre- and a power-amplifier  3x matching impedance's  3x adjusting bias currents and stabilizing them against temperature variations) for the 6$ it costs.

It comes in a surface mount package with a thermal pad. I found a old PCMCIA WIFI extension card which I sacrificed for this project. It contains a nice low loss circuit board with an almost continuous ground plane on the top and bottom layer and many many vias, connecting the two. This is what you want -- to get rid of the heat from the chip and to have a very low impedance ground connection, making RF circuits possible.


I cut the copper with a scalpel to form 2 microstrip lines for RF in and output. For the remaining pins (VCC and Enable) copper sheet was cut and glued on the board. This was easier and much more precise than cutting out the pads by hand from the ground plane.

A hot air gun was used to heat the board slowly from underneath. At some point the solder blobs melt, the chip is pulled in place and soldered with good thermal and RF contact to the board.


The board was cut to size and two SMA connectors were soldered to the micro-strip lines ...

A 30 dB attenuator was placed on the second port of the VNA to protect it from overloading. The effect of the attenuator on the measurements is removed by the calibration procedure.

First measurement was a low power frequency sweep, gain was over 30 dB from 350 MHz -  500 MHz. Exactly like specified in the datasheet. Nice! Output power was about 30 mW. It pulled around 300 mA from the PSU!

The next measurement shows an output power of about 2.4 W at 0 dBm (= 1 mW) input. Current consumption went up to 1.2 A at 3.6 V. The board got quite warm after a while of CW operation :) But for pulsed operation the heat sinking is more than enough.

Next measurement is a sweep of the input power from -25 dBm to 0 dBm. It was impressive to see the meter on the PSU jump up and down between 0.3 A and 1.2 A, synchronized to the sweep of the VSA. That's a sign of an efficient amplifier.

At 2.2 W of output power (-0.55 dBm input power) we reach the 1 dB compression point. Then the internal non-linearities of the amplifier reduced the gain by 1 dB. The missing power ends up in unwanted harmonics on the amplifiers output. If a "clean" output is necessary  the amp should be operated well below the 1 dB compression point. For the garage door opener that should be not much of a concern and the amp will be operated with around 0 dBm of input power. I also tried up to 10 dBm of input power, there was over 2.5 A flowing and the chip got really hot in CW mode. I'm sure it's not rated for that :) but I didn't manage to destroy it (yet)

We see the two tones from the signal sources, but we also see all kinds of harmonics which have not been there in the input signal. They all appear in a 100 kHz raster and are generated by non-linearities in the amplifier.

To quantify these non-linearities, one defines the "3rd order intercept point" as:

Ptone is the signal power at the initial frequency. Pdelta is the difference between Ptone and the harmonic next to it.
For this amplifier IP3 = 43.8 dBm. That means if we (theoretically) apply an input signal that is big enough to get 24 W of output power from the amplifier, only half of its output power would end up at the actual signal frequency, the other half would go into nasty harmonics.


Update: It's doing it's job now

The amplifier has been integrated in the garage door opener. Some more tests need to be done over how much range it actually provides and there is still significant potential in optimizing the antenna but still, it's pretty damn powerful :). 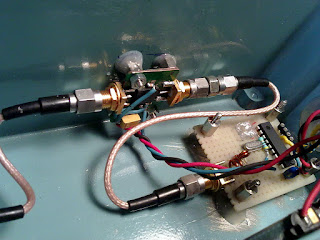 Disclaimer: With an output power of > 2 W, this device violates FCC regulations in some countries and should therefore never be operated outside the controlled environment of a shielded RF - laboratory.
Posted by Unknown at 8:59 AM